How to Manage your UI status and Do Not Disturb feature

Manage your User Interface status and your time by opening the drop-down menu of the UI in line with the coloured ring to the right of and below the user avatar, and select the desired status: 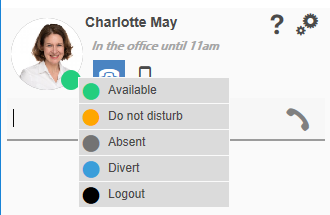 Call routing on Do Not Disturb

By clicking on the Setting icon highlighted next to your name you can manage the calls if busy or on “Do not Disturb” to your voicemail or to another extension, perhaps a colleague in the same team.

Difference between Absent and Do not Disturb status

The two statuses differ in managing calls from the phone system.  Please note that when the call arrives for a group of users and they are all on “Do Not Disturb”,.the group would appear engaged.

If all users were using the status “Absent” instead the group would appear unreachable, and the person calling may think the phone system isn’t working!

We suggest therefore that you set your extension to DND when away from the workstation temporarily and use the Absent status if away for longer periods.  You can set “Absent status set on logout” too.

You can edit the Status Phrase by clicking the text box next to your profile picture and User Interface Status. this is just a short sentence or phrase to let colleagues know if you are in a meeting or ready and available to help.

Alongside help on the User Interface Status, the VOIspeed Support page contains many useful pages for navigating VOIspeed’s UI.

do not disturb, UI, UI status, use UI, user status

Becoming a VOIspeed partner is an opportunity to grow your business and add value to your customers. Discover our partnership programme.

Looking for a phone system?

Would you like to have more information about our telephone services? One of our consultants will contact you to discuss your requirements.

Strictly Necessary Cookie should be enabled at all times so that we can save your preferences for cookie settings.

If you disable this cookie, we will not be able to save your preferences. This means that every time you visit this website you will need to enable or disable cookies again.